The Simpsons’ Futurama Crossover Came With Some Serious Baggage

Whether the result of an exciting idea or a gimmick to boost ratings, crossovers are a time-honored tradition in television, especially in animation. .. 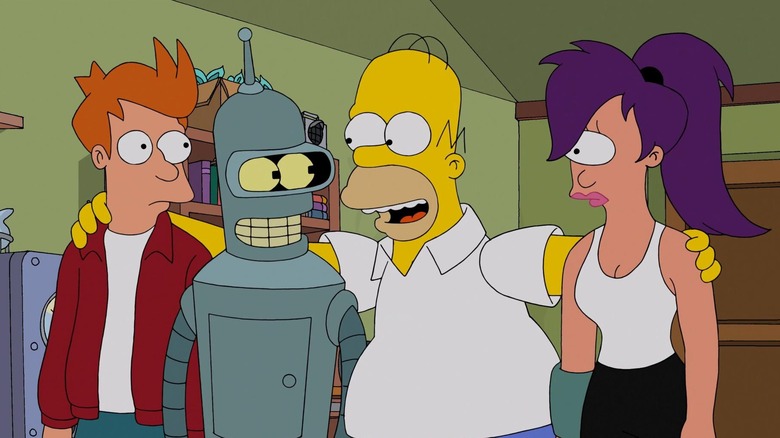 Whether the result of an exciting idea or a gimmick to boost ratings, crossovers are a time-honored tradition in television, especially in animation. When I was a kid, you better believe I was hyped for The Jimmy Timmy Power Hour, and plenty of kids and adults loved when "The Flintstones" met "The Jetsons." It can be fun to think about some of our favorite characters hopping from one show to the other for an episode or two. The funny thing about crossovers is that they can be very tricky. Getting two television shows, each saddled with their own team, to compromise on a project that would potentially have to alter each another's animation, humor and style to make things work, sounds like an impossible task.

One of the most successful attempts in recent memory saw "The Simpsons" blend with the world and characters of "Futurama" in the appropriately titled season 26 episode "Simpsorama." The episode sees Bender (John DiMaggio) travel back in time to kill one of the Simpsons, which inadvertently causes the creation of mischievous mutant creatures that contain their DNA. The time capsule device they come up with is actually a pretty clever way to bring the past and future of their respective shows together.

In addition to everything, It probably helps that both "The Simpsons" and "Futurama" are the brainchild of Matt Groening, sharing similar animation and humor. "Simpsorama" feels more like a "Simpsons" episode with the "Futurama" folks in it, but neither show overshadows the other. Continuity is usually indifferent to "The Simpsons," but I think it's a pretty cool little inclusion that Bender is essentially living in the family's basement until he wakes up back in his own time period.

The process of getting "Simpsorama" on the air may have gone smoothly from conception to production, but there was an initial hesitation due to the drama surrounding the show's first crossover.

This Crossover. It Stinks! (But Not, Really Though) 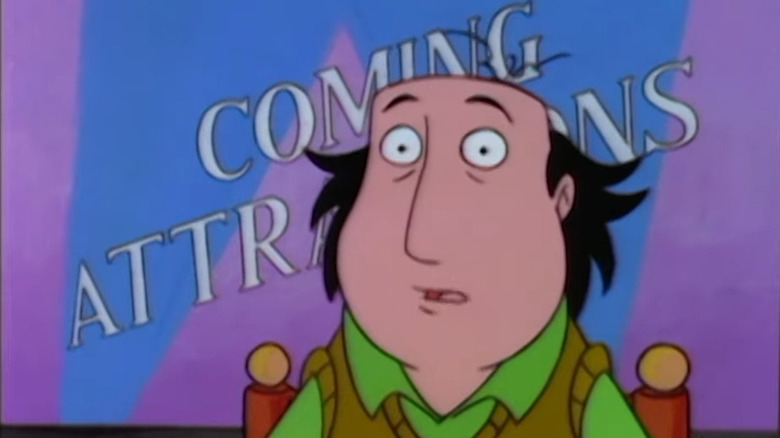 In a season 6 episode of "The Simpsons" entitled "A Star is Burns," Marge (Julie Kavner) proposes Springfield hosting its own film festival to make the town seem more cultured. Tasked with putting together the jury, she reaches out to Jay Sherman (Jon Lovitz), a New York based film critic, to be a special guest on it. At the time I saw this episode, I hadn't even realized I was watching a crossover. Although considering the network's disastrous handling of the show Jay came from, it's easy to see why.

Lovitz's Jay was the lead of Al Jean and Mike Reiss' hilarious, yet short-lived animated show called "The Critic," which largely featured the character as he's portrayed on "The Simpsons," albeit with some noticeable differences. For one, Jay was made yellow to fit within the world of "The Simpsons." "The Critic" also has a bit of a meaner streak when it comes to its humor. He's considerably less snarky here. It was no wonder the cult series didn't really catch on before its cancellation, given that it had hopped from ABC to Fox to Comedy Central.

It's a shame, because the two seasons it initially received contain a hysterical treasure trove of jokes for movie people. Of the "Simpsons" golden era, "A Star is Burns" is an episode that I frequently revisit for that very reason. The coupling of Hans Moleman's "Man Getting Hit by Football," followed by Barney Gumble's shockingly heartbreaking art house confession about his alcoholism is a great example of why this was one of the smartest writing teams in the business. But as it turns out, Groening was none too happy with Jay's arrival in Springfield at the time.

I Smell Another Cheap Cartoon Crossover 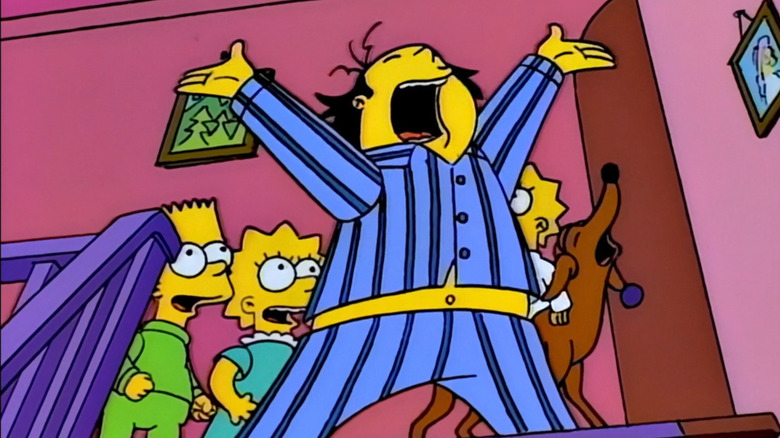 When asked by Lightspeed about getting "Simpsorama" off the ground, "Futurama" writer David X. Cohen said while he was excited for the crossover, he was a little leery at first given the crossover tension that transpired between Groening and "The Critic" writers Jean and Reiss' during "A Star is Burns:"

"Matt Groening felt the design styles of the two shows were completely different and that it would take away from the reality of the show. So he was very opposed to that, but it got pushed through against his objections."

When it came time to do "Simpsorama," apparently Groening welcomed the project, since he was involved with both shows. "As it turns out, Matt was on board; since he drew all the characters, he thought the styles could go together," says Cohen. At the time of "The Critic" crossover, however, Groening was so upset with the idea that he pulled his name from the episode prior to its airing. It's the one episode on the season six DVD set in which he doesn't make a commentary appearance.

At the time, "Simpsons" producer James L. Brooks had been really put off by Groening making a scene over the episode, especially since the "Simpsons" creator's distaste involved press attention. According to the LA Times, Brooks had felt that this was a "slap in the face" to Jean and Reiss, who had been a large part in making "The Simpsons" into what it was:

"He is a gifted, adorable, cuddly ingrate. But his behavior right now is rotten. And it's not pretty when a rich man acts like this."

Groening Didn't Want To Take Blame, Nor Credit For The Critic 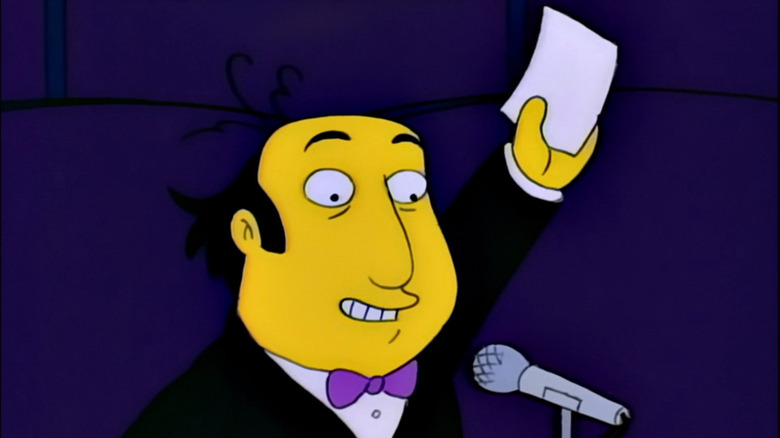 It didn't really matter that Sherman knew all of the words to the Oscar Meyer Weiner song because Groening definitely wasn't in love with him. Around the time the episode was airing, Groening had told the LA Times that he simply didn't want to be associated with "The Critic" in any capacity:

"The two reasons I am opposed to this crossover is that I don't want any credit or blame for 'The Critic' and I feel this (encroachment of another cartoon character) violates the Simpsons' universe…'The Critic' has nothing to do with the Simpsons' world."

It's a bummer that Groening had such a disdain for "A Star is Burns" given that it features some of the most memorable gags in the series run, and it was what led me to want to check out "The Critic" to begin with. I may have been initially confused by Jay not resembling his yellow demeanor on "The Simpsons," but once I got into the show, it didn't really matter. Although I suppose that's what Groening was upset about to begin with.

This probably explains why we never got another major crossover prior to "Simpsorama" besides the 2014 episode "The Simpsons Guy," which is odd considering the typically mean-spirited veneer of "Family Guy" steers even further away from the mild adult humor and animation of "The Simpsons."

"The Simpsons" has 32 seasons currently streaming on Disney+, and "Futurama" has 10 seasons available on Hulu with more on the way. Sadly, "The Critic" is not streaming anywhere, but you can buy it on DVD.

Read this next: The 15 Best Simpsons One-Off Characters Ranked

The post The Simpsons' Futurama Crossover Came With Some Serious Baggage appeared first on /Film.

Next post In Westworld Season 4, Episode 7, It All Comes Down To This, Unfortunately